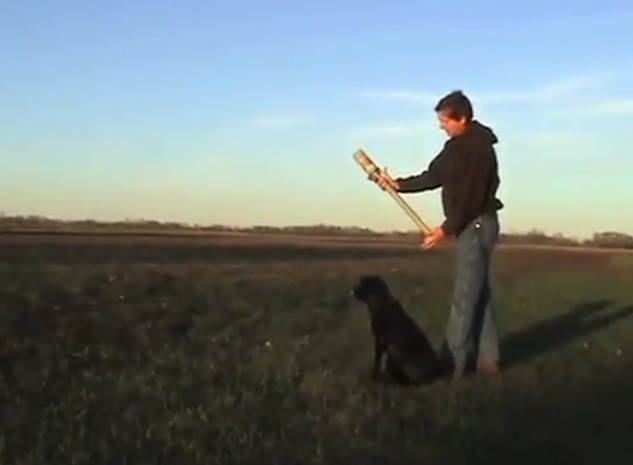 ‘Fetch’ and ‘back’ commands continue development of a puppy

Just because a dog will retrieve a canvas dummy that’s thrown in the back yard doesn’t guarantee the same dog will be able to perform up to it owner’s expectations in the field come hunting season.

The trouble with throwing canvas dummies is that the dog gets used to 25- to 30-yard retrieves. When a farther distance is involved, which is generally the case when bird hunting, the dog invariably will hunt short. Learn some gun dog training for beginners below.

Once a dog has mastered the sit, heel, stay, and come commands and has been retrieving canvas dummies thrown short distances, it’s time to incorporate two more commands—fetch and back.

Some owners interchange the fetch command with “fetch it up” or “hunt it up”, but no matter which one is used, they all mean the same thing—to look for or pick up something. The key to using these commands is to build up the dog’s confidence to learn that the commands mean to go look for and pick something up.

Which leads to the question of how to train a dog to fetch with confidence. First instill the fetch command in a dog when it’s young—12 weeks to 6 months old. Take three or four pheasant-scented canvas dummies, pre-plant them in a short grass field and work the dog into a light breeze, telling the pup to fetch it up.

What’s fun about this drill is you can do it by yourself, and as the dog gets more confidence, you can make it harder by placing the dummies in heavier cover.

Once the dog is fetching on command, it’s time to use the back command, which means sending the dog out on a straight line. By using the back command on younger dogs, it sets them up for advanced handling when they’re ready for blind retrieves.

The simplest way to work on the back command is to have a buddy with a starter’s pistol stand out in the field and throw the scented canvas dummies. If the owner is training alone, a retriever launcher is a great tool.

Retriever launchers can be fitted with either canvas or PVC dummy that is projected by a .22 blank. An advantage for the individual trainer is that the launcher can throw a dummy anywhere from 50 to 300 yards, depending on the type of load used.

When dogs are first learning the back command, just let them go hunt even if they get off the line. The key to the back command is giving the dog the opportunity to see the retrieve, whether from a buddy throwing a scented canvas dummy or a retriever launcher. Eventually the dog will differentiate between fetch and back.

Anytime a dog can’t find the dummy because it missed seeing it, that trainer should call the dog in and heel it out to the area, then tell the dog to fetch it up.

Wind direction is also a training factor. To start with, working a dog into light wind is preferable.

After the dog has mastered that, the trainer can start experimenting with harder conditions. The toughest one is when it’s dry and windy. After you have the fundamentals down, then your objective is to train in different types of hunting field situations that might throw the dog off. Anything from a gully in the field, creek, light and heavy cover interspersed, all can throw a dog off from the standpoint of not being able to find the retrieve right away.

Like any other training, you have to start the retrieves in no cover. It develops the dog’s confidence. Then you go to medium cover, then to heavy cover.

The biggest error most people make is they jump from no cover to heavy cover. You can’t do that unless you want to lose a lot of dummies.